J S Bach’s ‘Well-Tempered Clavier’, a monumental collection of 48 Preludes and Fugues, is recognised as one of the supreme achievements of Western music. Rich in musical invention and expression, its influence continues to resonate widely today.

Shostakovich’s 24 Preludes and Fugues, composed some 200 years later, were modelled directly on the Bach work. Masterly and eloquent, it has been acclaimed as one of the pianistic jewels of the twentieth-century.

In both cycles, each pair of works consists of a sometimes contemplative, sometimes virtuosic prelude, followed by a contrasting polyphonic piece.

Gusztáv Fenyő performs these two exceptional cycles side-by-side in five recitals, each beginning with Bach and ending with Shostakovich, thus offering a unique listening experience which promises to enthral with the sheer abundance of musical ideas while highlighting their formal connections.

It is possibly the first time the two cycles have been paired in this way in the UK and probably only the second time the Shostakovich cycle has been played in Scotland (the first by Gusztáv Fenyő in Music-Makers’ 2006 Shostakovich anniversary mini-series).

This imaginative coupling is not only innovative and challenging but also, potentially, a gateway to understanding the musical language of our own time. 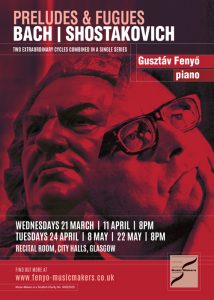 J S Bach (1685-1750) compiled two books of 24 Preludes and Fugues for keyboard under the title ‘The Well-tempered Clavier’. They were written at different times – the first, in Cöthen, was finished by 1722, the second, while in Leipzig, by 1744 (or possibly earlier). Bach recycled some of the preludes and fugues from earlier sources: the 1720 ‘Klavierbüchlein für Wilhelm Friedemann Bach’ (one of his sons) contains versions of eleven of the preludes of the first book of ‘The Well-Tempered Clavier’.

The prelude and fugue (a contrapuntal technique based on melodic imitation) had been a popular pairing well before the time of Bach, but in the hands of this master reached new heights of complexity and expression. Bach’s 48 has influenced generations of composers ever since, resulting in the fugue becoming one of the most durable forms in Western musical history.

Dmitri Shostakovich (1906-1975) wrote a single cycle of 24 Preludes and Fugues, although it is sometimes published in two books. They were inspired by the Bach playing of pianist Tatiana Nikolayeva at the first Bach competition in Leipzig, to mark Bach’s bi-centenary. He had not intended to write a cycle but he was bitten by the bug, as it were, and they were written over the space of about five months in 1950/51 and published the following year. Nikolayeva gave the first performance in Leningrad on 23rd December 1952.

The two works are closely related as Shostakovich composed his cycle using Bach’s 48 as his model. In a number of instances he uses some of Bach’s motifs, patterns and rhythms in order to create his own original pieces: this, in fact, constitutes a musical umbilical cord to the earlier work, while also paying homage to it.

Each of the five recitals will contain works from both cycles, always starting with Bach, but following the composers’ individual schemes.

“The late 1940s seem to have been the beginning of the process in which classical music audiences, for the first time in history, stopped listening to the music of their own time. Possibly it was an increasingly difficult listening-experience, and the music had become far too complex for amateurs to play through at home, as they had for centuries.

It is well-known that a study of Bach’s music influenced many important composers thereafter, from Mozart and Beethoven, through Chopin and Brahms, to Debussy, Stravinsky, Schoenberg and Bartók, and it continues to exert an influence on composers of today across many genres. Therefore, greater familiarity with Bach’s 48 Preludes & Fugues may help audiences in their understanding and appreciation of later music. It is largely through the efforts of great performers, firstly harpsichordists such as Wanda Landowska, and then pianists ranging from Edwin Fischer to Glenn Gould and András Schiff, that this music has become widely known and appreciated.

Shostakovich’s Preludes and Fugues are not only directly related to the Bach work, but they also show many of the complexities to be found in twentieth-century music and are, I strongly believe, an essential preparation for it. The programmes will present, side-by-side, works written over 200 years apart, during which time most development of musical styles took place.

One of the reasons, therefore, for coupling the Shostakovich with the Bach is to try to persuade audiences that this music is not difficult as such. In my opinion, there can hardly be a better starting point for those who find it difficult to understand or relate to much of the music beyond 1900 than these two cycles juxtaposed in this way.”

One of Scotland’s leading musicians, Gusztáv Fenyő has been highly praised for his cycles of works by Beethoven, Chopin and Bartók.

In 2006 Gusztáv Fenyő gave the first complete Glasgow performance of the Shostakovich cycle (at the Recital Room) and he has been playing portions of it ever since. He will be performing the cycle in Budapest in October 2018. He has performed the two books of Bach’s 48 on a number of occasions over the last few years.

He writes: “The preparation and execution of these two cycles have much in common. I have been practising and playing the Bach work without the benefit of the sustaining pedal, a device created for the modern piano. Bach’s music for keyboard in no way includes musical sonorities sustained in this way and I believe it makes greater stylistic sense not to use it. Therefore, all legato (the binding together of notes, giving the illusion of a vocal or string sustained line) is done exclusively with the fingers. The Shostakovich carries on from this practice in inviting the performer to use little pedal, making the fingers play more expressively and brilliantly.

As a result of studying these works for over ten years, I have increased my awareness of counterpoint (several lines developed at the same time) and expressive voicing, as well as achieving greater clarity in my playing of other composers’ works, including expressiveness in the left hand.”

‘…the kind of musical charisma that seems to sharpen the listener’s powers of concentration…’ The Herald.

For a fuller discussion of playing Bach on the piano, see Gusztáv’s blog 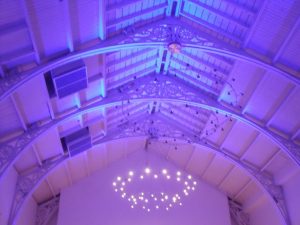 The series comprises 5 concerts during March, April and May 2018:

All concerts are scheduled to commence at 8pm and are expected to finish by 10pm, including a twenty-minute interval.

In 1950/51 Dmitri Shostakovich wrote a single cycle of 24 Preludes & Fugues which was intentionally modelled on the Bach work. In Shostakovich’s scheme, however, the pieces proceed in major/relative minor pairs around the circle of fifths: first C Major and A minor, then to one sharp (G Major, E minor), two sharps (D Major, B minor) and so on.

Gusztáv Fenyő will adhere strictly to each composer’s published order. The first part of each concert will be devoted to Bach, the second to Shostakovich.

The division of Bach’s second book into three programmes rather than two, as for the first book, reflects the longer length of the individual pieces; Shostakovich’s Preludes & Fugues also vary in length. The Preludes & Fugues of both composers have been divided between the five programmes partly to create programmes of roughly similar duration, but also, where possible, to create an appropriate conclusion to each concert.

Public transport and parking
The City Halls are a ten minute walk from either Buchanan Street Subway Station or St Enoch’s Subway Station (on Argyle Street), as well as both Queen Street and Central Railway Stations for overground services. There are also numerous bus services nearby – for further information visit Traveline Scotland.

Access
The City Halls are fully accessible to those with mobility difficulties, and wheelchair spaces are available. All entrances (i.e. from Candleriggs and Albion Street) are at ground level. There are lifts to all levels, including the Recital Room, which is located on the first floor. Specially trained staff are also happy to help (please let Box Office staff know at the time of booking your tickets).

If you have any queries, or require assistance when you attend, please contact the Box Office on 0141 353 8000.

Further details can be found here.

Food and drink
The Candleriggs Bar, on the same level as the Recital Room, will be open on the night to serve a range of hot and cold drinks.

Glasgow City Halls are situated in the heart of the Merchant City which has a very wide selection of bars, cafés and restaurants.

Under 18: FREE (via Box Offices only, by phone or in person. Proof of eligibility will be required)

Tickets can be booked online, by phone or in person from Glasgow city centre Box Offices.

In person from Box Offices at: