The use of the word ‘masterclass’ (and possibly the concept) in relation to music seems to have arisen at the time of Franz Liszt, arguably the greatest of all pianists, who engaged in teaching, as well as performing and composing, for most of his life. What Liszt meant by the word was a class for ‘young masters’, who would play to him in the presence of their fellow-pianists, thus listening, sharing and benefiting individually and collectively from his comments about the music and the approach to performing it. Illuminating the music was Liszt’s prime aim, since these pianists were already of a high technical standard – in fact he discouraged discussion of technique – and his very presence inspired them and made them feel they were better pianists. Nevertheless, the performances remained an essentially private affair, with only a few privileged non-playing listeners admitted from time to time.

This original concept of the masterclass has skewed considerably over time: the ‘master’ of the title is no longer the participant, but the teacher – a master performer – and a once intimate class, intended to nurture young performers in private, has become a public affair. 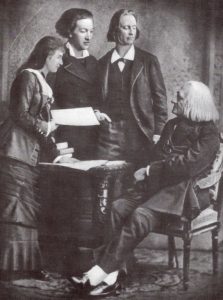 Almost any music academy or music school these days, and many concert venues, will feature a masterclass by people of note, performers or teachers, and the students may already be established young stars: Barenboim gave tuition to Lang-Lang in such an event in 2005.

However, the masterclass as we know it today, with large audiences attending, is a relatively new phenomenon, dating from about the sixties at the earliest. When I was a student in Sydney in the late-sixties there were no such classes; a visiting artist would give a talk and perhaps play a little but they didn’t hear anybody and no-one requested to play. In the seventies, Dartington offered masterclasses by marvellous musicians such as André Tchaikovsky and Sir William Glock, and I played for them when newly arrived in the UK. The audience for these was very small, mainly people who had come to attend the concerts later in the day or families of the students in the courses.

It would appear that the Masterclass of today is designed to offer an often larger audience an inside view of how the ‘master’ passes on precious knowledge to the, hopefully, talented but often inexperienced student. The latter is supposed to benefit immensely from this contact, lasting perhaps forty-five minutes, having been given precious grains of masterly knowledge, communicated to them both in words and actions by this uniquely gifted individual. They are supposed to leave the stage walking on air, having also received appreciative applause from the audience…they may or may not have paid a fair amount for the privilege, the master has possibly received a hefty fee for their class and the audience has often paid for the privilege of listening into a unique event, the alchemy of which (so it is believed) has produced an amazing change in the student from fairly competent playing, to a much better, wiser, maturer level of achievement.

Let’s examine more closely what actually may happen at one of these curious events. The ‘master’ begins with the advantage of a reputation, whether as a teacher or performer, whereas the student, with some exceptions, has no such reputation. They are at a disadvantage in other ways too: however well-prepared they may be, they have to perform, not only to an audience but also to a seasoned performer, an artist, who, perhaps, has played the piece numerous times and has known it for many more years than the student. They suspect there is room for improvement but don’t really know what will happen…

The master may begin the class expounding about the circumstances surrounding the composition to be played, the composer’s style, the poetic meaning of the title and so on: good stuff but nothing that cannot be gathered from books and, these days, the internet. This gives the student the chance to get thoroughly nervous, waiting on stage while seated at the piano, before they play, which, of course, would not happen in an ordinary concert performance. 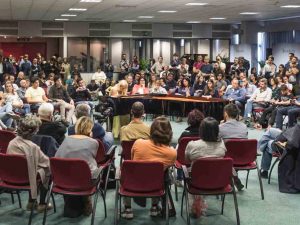 Then the student is asked to play the movement or the entire piece through; very often it is quite good, it’s a performance, generally well-prepared, as you’d expect. But of course, it wouldn’t do for the master to say “wonderful, just watch the tempo change in the second page” (what’s so masterly about that?); and the audience would be disappointed. So they say that it’s very good and ask the student to start again. The student, naturally, thinks they have done something wrong and gets even more nervous: the second time, oh dear, it doesn’t goes so well and they have even played two wrong notes, so they are stopped before the end of the first page. The master then begins to communicate some of the dynamics, phrasing, rubati, mood and tempo changes in the piece (much of which could  be provided, in any case, by a thorough study of the printed score), preferably with physical gestures which reveal the love, nay, the passion the music brings out in them. Fingerings, hand position, pedalling or other technical matters we would touch on in a private lesson, no, that’s too technical for the audience and we don’t mention it, though that may actually be the problem needing to be solved.

But the main thing is to show the expertise through demonstration because, after a while, explanation, coaxing and exhorting is no longer enough, so teacher ceremoniously sits down at the second piano (or the only piano, shoving the poor student aside) and shows how this work should go. This is where the audience really begins to appreciate the mastery of the master: of course he (or she) plays it better than the student, even if he hasn’t practised. The performance, even if it’s just a page, gets an enthusiastic hand and, now that the mood is lightened up he can tell a story or anecdote, probably about himself, not always too funny (but the audience will laugh anyway), which will movingly show that, as well as being an exceptional artist and teacher he’s just a human being like all of us. In the worst cases, the student is the butt of a joke or a derogatory remark which will be funny to the audience but hardly ever to the poor student, who begins to play worse and worse until the end of the ordeal (I myself have occasionally witnessed such behaviour by famous musicians). He has been used and, in the worst cases, abused, to give prestige to the ‘master’, enhance his reputation and entertain the audience.

Of course, this cynical and somewhat simplified description doesn’t apply to the best classes by great artists, but, although not intentionally destructive or demoralizing, the masterclass can turn out to be just that. All too often it is an event giving kudos both to the institution or venue and the teacher, as well as providing entertainment and, occasionally, some know-how to the audience.  It is, sometimes, even beneficial to the student, who may have learnt something special – but even if they don’t, they can and will include the name of the eminent master in their biography among all those they went to for such classes, which may be the reason why they went in the first place: to help further their careers, as an addition to “they studied with so-and-so”.

But why has the masterclass turned into such an often tawdry affair? Is it not because instruction is a deeply personal interaction, almost an intimate sharing of secrets gathered by the older, more experienced musician, with the, often, younger, less knowledgeable or less aware musician? It is a relationship, in private surroundings, between just two people. And because that teacher may have, indeed, almost certainly has, performing instincts and is a performing animal, he/she begins to ‘perform’ when an audience is present. He can rarely forget the audience and unconsciously plays up to it, instinctively suspecting that if he doesn’t the audience will be bored, which they will be. That third participant, the audience, is, effectively, an intruder in that delicate balance, that fragile relationship, and it has no place there. Good teaching cannot be a public event, like a concert; and thus, on balance, the public masterclass is not of real musical benefit to the student.

That Liszt format we began with, a private performance class, complemented by one-to-one lessons where technical matters can be dealt with, is a much more satisfactory way to learn: students play to the teacher and to each other, thus learning in a healthy, natural way without the pressure of the outsider on either master or pupil. I believe it is time to return the masterclass to the ‘young masters’ as the raison d’etre of the masterclass.